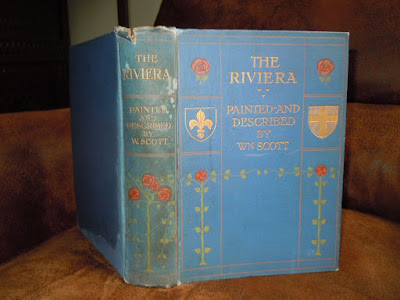 I collected A. & C. Black travel books back in the 1990s.  I found my first one, The English Lakes, at a library sale in Massachusetts and was enchanted.  They have illustrated bindings and many paintings and drawings inside.  This one has 75 color illustrations.  I've always liked travel narratives, especially the old ones.  They were often inexpensive at library or yard sales.  I love the first person tales of foreign, or sometimes not so foreign, places.

Katrina  and I discovered that we both had this book, so we decided to read it at the same time.  It's taken us longer than we had expected, but I think we're both finished now.  Look for a post at her blog shortly.  My copy isn't in the best condition.  I think I paid $30 for it.  You may think that's a lot, but a pristine copy of this book sells for about $245.  The inside is in good condition, except for a water stain in the back along the spine.  All the tissue-covered illustrations are there and the illustrated fold out map is still in the back.

I was feeling guilty writing about a book that's hard to find and often expensive if you can find it.  But I was looking for it on-line and it appears that it's a free down-load here.

William Scott, the writer and illustrator, doesn't hesitate to tell us what he thinks about places.  He often tells us that 'there is nothing of special interest in the place' or 'there is nothing at present to detain us'.  He thinks that the French Riviera is more enticing to travellers than the Italian Riviera.  He thinks that Italy is not as welcoming to travellers, although he admits that those seeking the raw beauty of nature will find it in both places, but perhaps more so on the less developed Italian side.  He tells us which restaurants and hotels to avoid, sometimes naming them, and which places will always give us simple but good food and wine for a reasonable price. 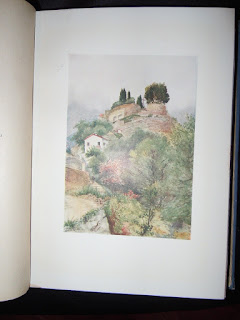 Robert Louis Stevenson lived in Hyeres and loved it.  There are Roman ruins and tall aqueduct arches in Frejus.  Grasse smells of the perfume and candies it's famous for and is, to him, the perfect city, with no poverty.  Vallauris, home to the pottery industry, is a 'pleasant outlet for superfluous cash in over-burdened pockets'.  In 1907, when this book was written, there seem to be trams and trains to everywhere.  Travel was mostly by train and then by foot, bicycle, or carriage, with the occasional automobile.  I want to go back to those slower times with fewer people! 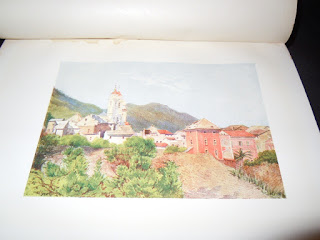 Monte Carlo and Cannes already had casinos, and reactions to them were mixed, as they are today.  He says that people who lived in Monte Carlo were not allowed to gamble in the casino, except on one day a year.  The casino also had the right to refuse entrance to anyone it deemed undesirable.  It's his opinion that many amusements aren't worth indulging in, that they invite a  'rowdy and undesirable element', that 'Life can be enjoyed and be pleasant enough without them, if personal worry, that arch enemy, be absent.'  Yes, that's true.  If only we could get rid of that pesky 'personal worry'. 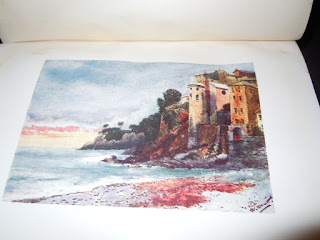 Scott would rather ramble up a steep cliff to admire the view or visit an ancient village, many of which have been desecrated by modernization.  The ancient town of Antibes, one of the rare Medieval walled towns, has been 'uselessly sacrificed to a pestilent craze for modernity'.  And it continues.

He raves about the stupidity of customs officers. He thinks they are the scum of the earth, having no qualifications or skills and reveling in their powers to annoy and delay.

I think Scott would be a bit prickly to travel with, but I enjoyed travelling with him via this book.
Posted by joan.kyler at 10:31 AM

joan.kyler
I was born in Lancaster, PA, and I'm back again. I spent most of my life living in and around Boston. I miss New England, but want to be closer to my family. I meant to be a writer but it was easier to make money in business and investments. I spend a lot of time and money trying to save animals, both domestic and wild, or to, at least, improve their lives. Humans are so prevailingly, if often unconsciously, cruel to other species. The photo is of me and Lawrence, our second adopted bovine at Farm Sanctuary in Watkins Glen, NY. RIP, Rhonda.